How Jen (A New Mom) Got Her Groove Back!

I was a DSC member for several years prior to 2015.

I was in the best shape of my life and had just recently completed my first half marathon.

I worked hard and had accomplished a lot!

Then that whole Mom thing happened...again.

Our family grew and working out dropped to the bottom of my priority list...again.

My fitness and health took a backseat for a long time.

I am now a Mom of four, ranging in age from teenage girls to twin three-year-old boys and working 50+ hours a week.

I am sure many can relate to this same scenario.

But when I refused to be in any holiday pictures due to my negative self-image, I knew something had to change for the better – both for myself and for the good of my entire family.

It was important for me to feel good about myself again not only for my own well-being but also because I wanted to set a good example for my teenage daughters.

I tried home workouts, but I knew with no one was watching so I didn’t really have to work that hard.

Mentally I couldn't push myself because the only person that would know the difference was me so clearly holding myself accountable wasn't enough.

I then tried a conventional gym because I was embarrassed with my current physical ability to be honest.

It is especially hard when you have reached a certain level of fitness because you feel like you're "behind" and starting over isn't easy.

However when I got there I would find myself standing around for the first 20 minutes wondering what I should do.

Then by the time I had made up a plan for my workout, it was basically time to leave.

So I knew what three letters were the answer – DSC!

When I joined DSC for the first time I felt so good about myself however the second time around was a completely different experience.

I unsuccessfully fought back the tears as I walked through the DSC doors for the second time around.

For the last 2 years it was actually easier for me to avoid the gym entirely then it was to put one foot inside DSC.

I even cried through the warm-up and tried to avoid that huge mirror whenever possible throughout class.

I picked up weights, knowing that they were less than I could do previously.

I ran slower than I knew I used to run, and felt far more exhausted than I remember ever feeling.

But I also absolutely knew DSC was the exact place I needed to be.

Instead of fearing the coaches would judge me as I walked through the door, I knew they would lift me up when I needed it most and their support and encouragement would help me to get back to the spot that I needed and wanted to be!

All the coaches have done exactly that for the last 5 months.

I admit that I can get bored easily.

The variety in DSC's workouts, the music, the great personalities, and the encouragement from each of the coaches keeps me coming back day after day!

I know if I am not working at my full potential or my form is wrong the coaches will be right there lending support and guidance.

A few months into being back at DSC in a consistent workout routine, I was ready for the next step.

My original reaction was “I don’t need that…I know how to eat" (or in my case how to try and avoid eating, which actually was doing more harm than good).

Boy was I WRONG!

When I was advised by the Nutrition Coaches, “Jen, you need to eat more”,  I was petrified!

Not unlike many women, I had spent most of life ALWAYS trying to eat less.

That is the message sent to us constantly and the original "easy solution" to lose weight.

With their guidance, I started eating more of the right foods to fuel me both during my busy days as a mom and my workouts.

I was actually eating to burn fat.

Good or not so good, I was held accountable for all the foods that I ate by both myself and my nutrition coaches.

This really was a game changer for me in tackling my overall health and long-term goals of a healthier, happier life!

Being back at DSC has resulted in 20lbs. lost! 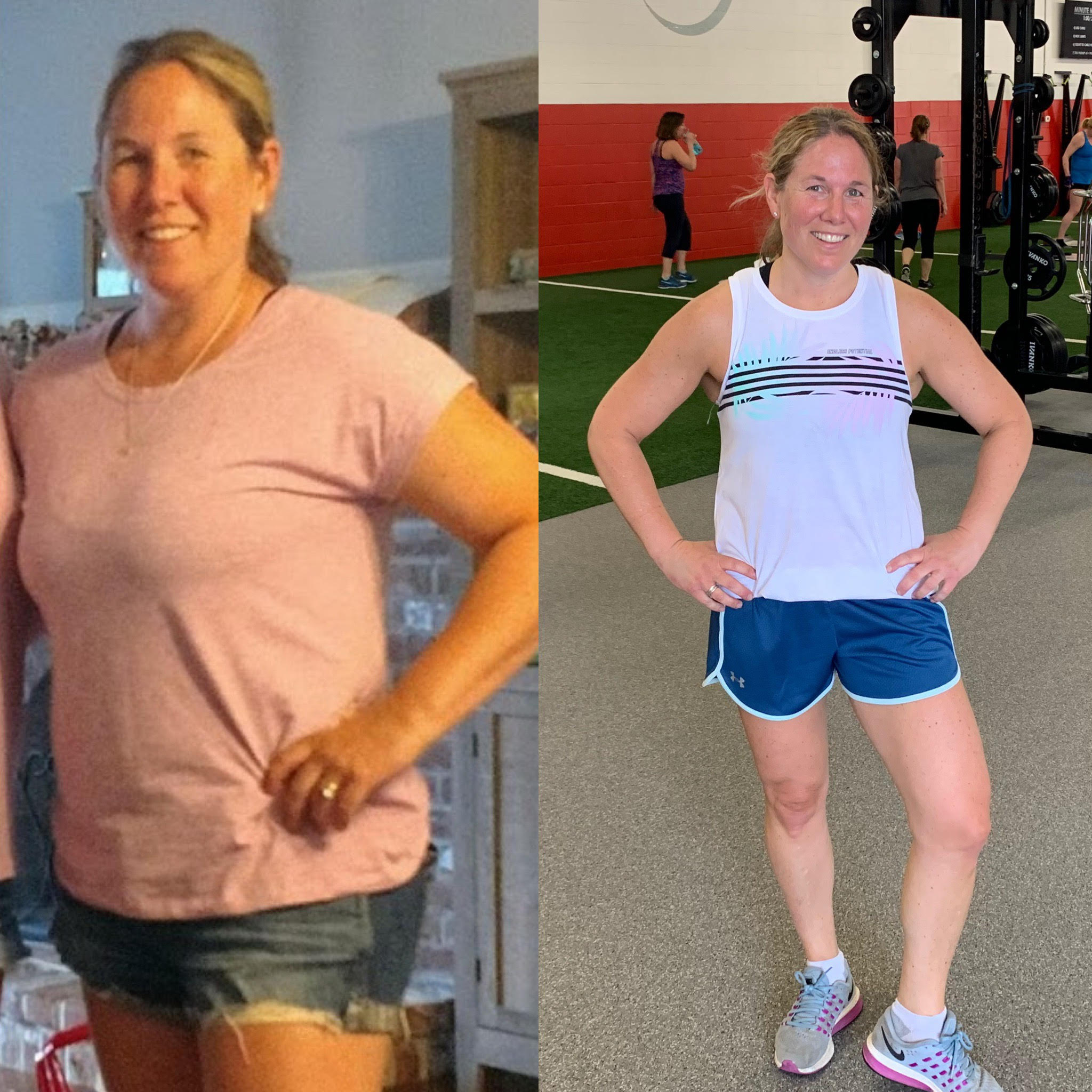 But more than just what the scale shows, I feel stronger and so much healthier!

A word of advice to anyone considering joining DSC – overcome whatever fear you have, take that first step through the front door, and come see it for yourself.

I promise you will not have any regrets!

The coaches will be there to help you every step of the way regardless of what your starting point is!

I can't believe I waited so long to return when I knew DSC would be the best possible environment for me to be in, but I am so glad I did...after all it was only ever me holding myself back by judging myself!