As many before me, most of my life was spent experimenting with quick fix, weight loss programs that were not sustainable.

A couple of years ago I found myself weighing in at an all time high.

I was diagnosed with borderline high cholesterol, my joints hurt, I was tired all the time and just felt sluggish.

Then a few years ago, I began a quest to improve my overall health rather than focusing only on dieting and weight loss.

The first thing I gave up was artificial sweetener. I was the Splenda Queen!

I did some research on the negative affects that artificial sweeteners have on brain function and how your body doesn't know how to process this fake, man made substance.  So I gave it up.

That meant no more diet soda daily or Splenda sweetened coffee.  My only alternative was to drink these beverages with sugar and I didn't want to consume soda with sixteen teaspoons of sugar per one can serving!

It took me the better part of a year to acclimate to this change, but I began to feel better about the choice I made.

I also began to drink more water and seltzer water and found it satisfying. Today, I can't drink soda without cringing at the sickeningly sweet taste.  And diet soda?  Won't even touch the stuff!

The next attempt on my healthy lifestyle journey was experimenting with the Whole 30 concept of eating. Basically for thirty days you eat only whole, nutritious foods, lean (grass fed, if possible) meats, and eliminate all prepackaged foods (not just junk foods). It also eliminates all forms of sugar and grains, which can cause inflammation in joints and gastrointestinal issues. Since I was experiencing pain and inflammation in my joints due to osteoarthritis, I thought, why not, and embarked on this eating plan as a personal experiment.

To my surprise, I started feeling better and noticed, what I thought was, a slight improvement in my joint pain and inflammation. I didn't feel as sluggish and didn't have "fog brain".  I even lost 20lbs. Huh!

Maybe there was something to this.

So I continued to eliminate the sugar and grains until the holidays...

That's when it all unraveled and along with the unraveling came the joint pain and inflammation (I couldn't take my rings off!), the bloated, overall, sluggish feeling and believe it or not, "fog brain".

I knew, at that point, there was something remarkable and good about eating for my overall health and not for temporary fixes.

Over the next year I committed to cooking differently and batch cooking to prepare for meals and snacks for the week.

However, due to the lack of calorie intake awareness, the weight came creeping back on slowly.  I felt better overall, but there was still some pieces of the healthy lifestyle puzzle I needed to find to complete the picture.

One of those vital pieces was joining DSC.

In October of 2016, I joined the Women's Group Program at DSC.

Little did I know this would change my life and my view of exercising.

I lost 16lbs the first couple of months working out at DSC and looked forward to Tuesday and Thursday nights. In the past I had belonged to quite a few gyms and never did I look forward to exercising.

DSC changed all that!

One significant factor that kept me plugged in was the new friendship and work out partner I found at DSC, Deb Perry.

We joined at the same time and began to partner up with "I go, you go" circuits.  From there we transitioned to the coed groups in the late spring and we are still work out partners.

Having another person who cares enough to push and challenge you when you doubt your abilities, is a wonderful thing! Deb said once, "for a little lady, you're pretty strong!"

Just last week, Deb motivated me to jump up onto a two foot high platform by simply saying, "You've got this!  You can do it!"  And I did :)

Although I had lost 16lbs during the first few months after joining DSC, was working out regularly and felt I was getting stronger, I found my weight had plateaued.

In all honesty the scale was starting to creep back up, again.

I had read about all the great results other members were having with DSC's Nutrition Coaching Program and thought I'd give it a try.  And did I do it alone?  Nope!  Deb Perry was right there with me!

The problem, I believe I was having, was I was completely unaware of my calorie intake, how to fuel my body before and after workouts, and I was trying to go it alone when I was implementing a food plan.

I didn't have any form of accountability and even though the internet offers a plethora of information regarding healthy eating, it's pretty overwhelming!

I didn't want another weight loss program that focused on the scale as a measure of success or to be just another client in the vast industry of weight loss.

The main thing for me was that, the DSC nutrition program was conducted by coaches and members of the DSC family as opposed to an outside, independent program that had no idea who you were and what your workout goals were.

The camaraderie and support of the Facebook page, the encouragement from the all the coaches who knew you were part of the nutrition program, the personal and individualized attention, the support and of course, the results, were amazing.

Just like when I first walked through the doors of DSC and the coaches addressed me by name, the coaches of nutrition program extended the same personal, warm interaction.

Just like the model of the training groups where there are many coaches individually guiding you at any given time, the nutrition program provided the same personal, individualized attention to your needs.

Beth Rioux was my nutrition coach, but Tommy and Matt would ask how I was doing with the program.

It was the genuine support of the whole team at DSC that set this nutrition program apart from anything I've ever been part of.

As an experienced dieter some of the information presented was familiar to me, but it was the tools and the multiple weekly live chats that kept the momentum going.

There were no weekly weigh ins or judgement on the food logs passed in each week.

It was a lesson on how to eat healthy and live life in the process.  I have always dreaded logging my food. Hated it. But this time it was different.

There was a different mindset and process encouraged by the nutrition coaches.

And as silly as this sounds, it was the visual macro pie chart that motivated me to use the My Fitness Pal app!  Knowing the percentage of macro nutrients I needed each day took the focus off of logging the foods I was suppose to eat and put the focus on choosing foods with the healthy nutrients I needed to fuel this body to be the best that it could be.

I wasn't sure what my results would look like at the end of 8 weeks.

I ate meals I loved, snacked,  properly fueled pre-workout and post workout, and even navigated Halloween and Thanksgiving!

Well, I am pleased to say that I lost 11lbs, 2 inches off my hips, and 2 inches off my waist. My body-fat went done 4.63% and went from "good" to "excellent" in the ACSM percent body fat norm for my gender and age group. 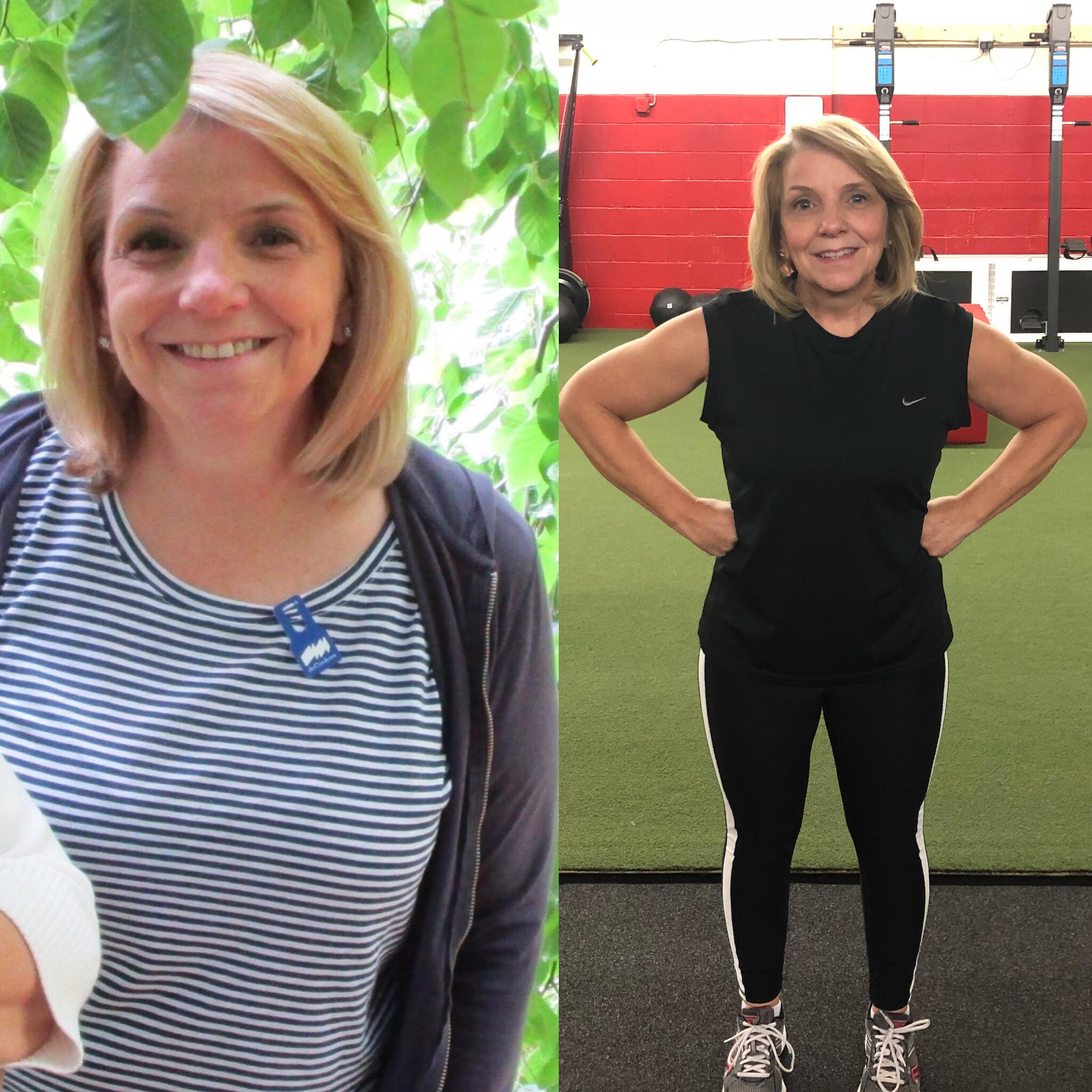 That last category was the clincher!

My results do not end there.

My cholesterol had been steadily climbing over the years and last year I was given the option of being put on medication to help lower my numbers.

They had come down slightly from 2015-2016 but not enough for the physician to be convinced I was serious about really doing something about it.

Well, I asked if she could give me one year to improve my stats and she agreed.

I finally found the last puzzle piece to complete the picture of a healthy lifestyle that I had been searching for.  My main goal was to be healthy and strong, not skinny.

My yo-yo diet days are over!  Phase Two here I come!

If you have ever been on the weight loss and dieting hamster wheel I encourage you to give this program a try!  You will not be sorry!

And in the words of my workout partner, "You've got this!  You can do it!"

Do you need help making 2018 your healthiest year yet?

Are you ready for the body you deserve?